Automatic doors are used all over the world. You probably use them almost every day of your life, from supermarkets to schools, hospitals, and offices. Automatic doors are thought to have originated in ancient Greece, which might surprise you. Heron of Alexandria, a Greek mathematician, devised an automated door mechanism based on a set of ropes and pulleys.

Automatic doors were not developed as a mainstream commodity until the twentieth century, after the initial spark from Greece into the world of automatic doors. Horace H. Raymond and Sheldon S. Roby, two American engineers, produced the first optical system to open an automatic door in 1931. Wilcox’s Pier Restaurant installed the device to aid waiters in carrying plates and glasses.

Another pair of Americans, Dee Horton and Lew Hewitt, invented the first automatic doors powered by mat actuators in 1954, during a time of post war optimism. Mat actuators are regulated by an electronic device concealed inside the door mat. The door immediately opens when someone stands on the mat. Throughout the 1960s, automatic sliding doors became increasingly common, and they were installed all over! 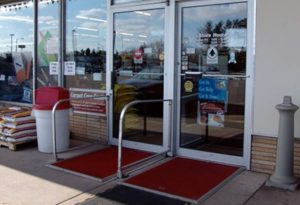 Motion sensors were developed in the 1970s and used to actuate the opening of automatic doors. This sparked a surge in popularity, with automatic doors assisting in providing disabled access and opening up buildings on a large scale using contactless technology. 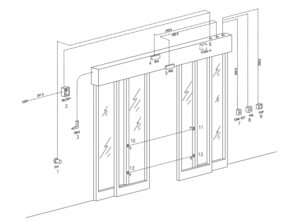 Automatic doors have become a familiar sight on commercial buildings around the world in today’s high-tech society. We have over a decade of experience installing and maintaining automatic doors at The Automatic Door Business. We have all of the necessary skills and experience to ensure that your automatic doors continue to operate at peak levels for several years.

Tweets by glassaftercare
We use cookies on our website to give you the most relevant experience by remembering your preferences and repeat visits. By clicking “Accept”, you consent to the use of ALL the cookies.
Cookie settingsACCEPT
Manage consent

This website uses cookies to improve your experience while you navigate through the website. Out of these, the cookies that are categorized as necessary are stored on your browser as they are essential for the working of basic functionalities of the website. We also use third-party cookies that help us analyze and understand how you use this website. These cookies will be stored in your browser only with your consent. You also have the option to opt-out of these cookies. But opting out of some of these cookies may affect your browsing experience.
Necessary Always Enabled

Any cookies that may not be particularly necessary for the website to function and is used specifically to collect user personal data via analytics, ads, other embedded contents are termed as non-necessary cookies. It is mandatory to procure user consent prior to running these cookies on your website.

SAVE & ACCEPT
Go to Top